Yin and Yang Represent a Cyclical Spectrum of Energy

Yin and yang exist as a balance and cycle of opposites, with each playing an important role in universal harmony. In New Age thought, you may hear the concept of yin and yang referred to as duality or polarity, where in order to understand one experience, you also have to understand its opposite experience. For example, you can't comprehend the sensory experience of cold unless you also understand what hot feels like. In this case, hot (yang) and cold (yin) represent the opposites on a spectrum of temperature. Similarly, yin and yang represent the opposites on a spectrum of energy; however, each flows into the other and contains a piece of the other in order to create universal balance. Neither is inherently good or bad, and the entire spectrum is necessary for the full experience of life.

You encounter yin and yang every day. Some of these examples are easily recognizable while others are less so.

Every day as the Earth rotates, you experience a yin and yang cycle. When day breaks, the yang cycle begins as the sun rises and warms the Earth. In the light of day, everything comes awake, the sun heats the planet, and people begin their active cycles of work, feeding, relating, and play. Then, as the Earth rotates away from the sun and night falls, the yang cycle begins. Plants, many animals, and people become more dormant and there is little natural light by which you can see. This allows for regeneration, reflection, and repair after a day of activity until the rotation of the Earth begins the cycle again, yin continuously flowing into yang. 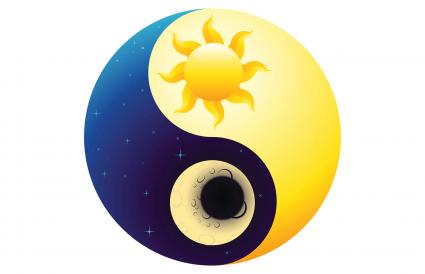 Seasons are another example of yin and yang as the Earth travels around the sun. The seasons of spring and summer are active yang times when the planet comes alive with new life, growth, and increasing sunlight. During the rotation, plants inevitably return first to decay and then to dormancy in the seasons of fall and winter when the Earth enters its yin cycle again. All are necessary for the cycle of life and growth on the planet, and none are more important than the other.

While masculinity and feminity appear to be polar opposites with no flow between them, these exist on a spectrum as well, and there is interplay between them. Pure masculinity is a yang aspect; it's aggressive and active while pure femininity is a yin concept, passive and receptive. However, no person always completely embodies masculinity or feminity regardless of their gender identification. Even the most masculine people occasionally need to call on tenderness and receptivity, while even the most feminine person occasionally relies on aggressive, active action. In this way, the yin and yang flow through everyone and seek to provide balance and harmony to create a whole and complete personality.

Examples of Yin and Yang in Movement Practices

Many movement practices also balance the concepts of yin and yang, and how you move your body in these practices cultivates the different energies.

Yin and Yang in Martial Arts

In martial arts, the focus of energy is on both attack and defense. When you attack in a martial art, this is active, aggressive, and yang. However, in defense you become more receptive and yin in order to assess, react to, and use the force of your opponent's movements. Some forms of martial arts are more yin. For example, tai chi with its gentle, flowing movements channels more yin energy while taekwondo with its active, aggressive movements channels more yang energy. Aikido is an example of beautifully balanced circular yin and yang movement balancing force and flow as well as aggression and receptivity.

Yin and Yang in Yoga Practices

Yin and Yang in Other Elements of Life

Yin and yang flows through every aspect of your life, from your workspaces, to your home, to your relationships. In most cases, nothing remains entirely yin or entirely yang for eternity, rather it flows along the spectrum and around the circle, drawing on elements of each aspect as it's needed for day-to-day life.

Yin and Yang Go Beyond Duality

While at first glance yin and yang appear to be about polar opposites, there's more to it than that. The elements of both yin and yang are necessary in your life, and they flow from one to another as needed in order to create balance and harmony.