The tai chi symbol is also known as the yin yang symbol, which is the epitome of balanced chi energy. While it looks simple, the tai chi sign has multiple elements that are all deeply symbolic. There are specific symbolisms within the tai chi design, especially the black and white tear drops, which create a sense of clockwise movement.

The Outer Circle of the Tai Chi Symbol

In tai chi, as in other eastern philosophies, the outer circle of the yin yang symbol represents the universe. It also represents the cycles of the earth, such as birth, childhood, maturity, and death or the transition from season to season. It also describes the circular and flowing movements found in tai chi, which mimic the meanings of the circle in the yin yang symbol.

The two tear drop shapes of opposing colors are referred to as fishes (carp or koi) in tai chi, and they represent the male (yang) and female (yin) properties of chi energy. Perfectly in proportion, they show that these two energies not only oppose one another, but they exist in harmony. These properties are found in all matter since chi exists in all things. Male energy is light (white) and active. Female energy is dark (black) and passive. When combined in a balance of power, these two energies create harmony or what is known as chi. This is the same balance of energy that feng shui applications can achieve inside and outside your home. In tai chi, this represents the active and inactive form in the martial art, coming together to create a balanced and harmonious whole. It also represents the differences between the active, hard movements and the passive, yielding movements of tai chi.

When examining the yin yang symbol, it's easy to understand how the opposite sectors are depicted. Each reigns for an equal (balanced) amount of time. Each begins small then grows larger until the next phase begins. In tai chi instruction, this represents how one at times must be relaxed in the body (yin) for optimal flow but have the feet and stance solidly planted (yang) to provide balance and support.

Eyes of the Fish

Within each of the tai chi fish is a dot of the opposite color: the eyes of the fish. This is a reminder that there can be no yin without yang, and no yang without yin. Each needs the other for balance. Tai chi requires both power and softness.

The formation of the tai chi symbol and the fishes on either side give the illusion of clockwise motion. This is very significant in tai chi, as practitioners always start on the right oriented to the south, move to the left, and finish again on the right. This replicates the motion of planets in their orbits and represents the motion of the universe.

The yin yang symbol demonstrates what's known as the Ten Thousand Things. The Ten Thousand Things is a term used to signify all things found throughout the universe. It's an expression of all encompassing just as the chi energy fills all things. That means that within every living matter there are light and dark energies. When those energies become imbalanced in nature, the effect can be in the form of natural disasters. 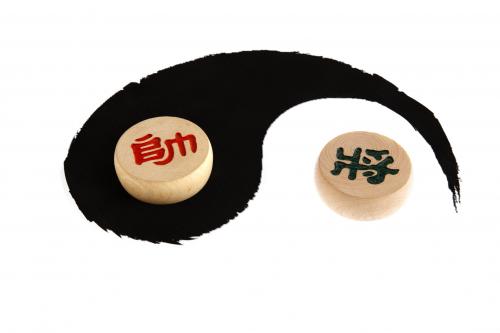 In addition to the male and female representation, the tai chi also embodies the Ten Thousand Things, which includes the four major compass directions and the four seasons. Directions and seasons are vital to the creation of beneficial feng shui. A feng shui practitioner orients her efforts to be in harmony with the energies of these directions and seasons. The symbol of balanced chi with yin and yang in proper alignment is the ultimate depiction of the natural harmony found in nature.

In feng shui, the south is considered the most auspicious direction. Unlike Western culture that orients all maps and life to the north, the Chinese, fathers of feng shui place south at the top of their maps. The southern direction is the most beneficial orientation for growing crops since it affords farmers the most hours of daylight. This is an excellent example of the complexity and logic that governs the art of feng shui. This southern orientation of the top of the circle makes it easy to identify the other directions within the yin yang symbol.

The sign for tai chi also gives an artistic expression of the four seasons and explains the teardrop shapes found in the yin yang symbol in a different way.

Spring is the season when new life bursts forth. This is represented in the white (yang) teardrop of the tai chi that starts as a tail-shape. This narrow point expands as it grows toward the top of the circle (south). This bulb portion represents the yield of summer growth. Summer days fade into fall as the yang energy gives over to the yin side of life. This means shorter days and more darkness. The temperatures also go from hot to cold as fall gives over to winter. This transition is represented by the teardrop increasing into a bulb shape at the bottom of the circle which is the north direction. This is the exact opposite of the white teardrop that represents spring and summer. The cycle then begins again in an eternal process. This is how the yin yang symbol becomes one of eternity.

In your quest to find the right medium for your yin yang symbol, you'll run across many other variations of this symbol. Some transpose the positions of black and white with the movement changed to that of counter-clockwise. A few even turn the teardrops from a vertical orientation to a horizontal one. While these are artistic expressions of the tai chi symbol, they aren't the true representations of the flow of yin yang energy.

Comments
© 2006-2021 LoveToKnow, Corp., except where otherwise noted. All Rights Reserved.
Meaning of the Tai Chi Symbol