The monkey is one of the Chinese astrology animals. In many instances, it can bestow auspicious benefits to those wishing to use it as a feng shui symbol. Discover the meaning of the monkey in feng shui as well as tips for its most auspicious placements.

The monkey is one of the 12 Chinese astrology animal signs. Those with this sign are very social and make great friends. They can act impulsively, and this can be to their detriment. However, the monkey is known to be very clever and talented and can outwit opponents.

The monkey is often depicted in figurines and artwork holding various feng shui symbols or paired other Chinese astrology signs. The symbolism is often displayed in specific sectors to inspire and represent various auspicious energies.

A lone monkey is often depicted holding an auspicious symbol, such as:

Monkey on a Horse

The depiction of a monkey riding a horse is one of the more popular depictions of the rise to power. The horse is a symbol of power, strength, and loyalty. The monkey adds a touch of cleverness and flexibility. Together, the two become symbols of a quick promotion and are used by those seeking a career promotion.

The combination of the monkey's intellect and the elephant's strength makes a powerful symbol that can be placed in areas that require a triumphant infusion of energy. This depiction often shows the monkey holding gold coins while riding an elephant. This represents not just victory over challenges, but also an abundance to follow.

The Monkey King isn't just a fictional tale. It's based on the legendary monk, Xuan Zang, a Buddhist monk of the Chinese Tang Dynasty (618 to 907). He traveled to India to translate the holy Buddhist books, Sutras, into Chinese. His translations proved to be one of the most significant contributions in bringing Buddhism to China. His journey hardships and obstacles became the fodder for many stories about him, including the book, Journey to the West featuring the Monkey King, Sun Wu Kung. 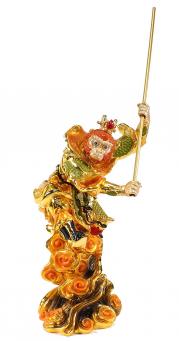 Statues of the Monkey King

There are many choices when it comes to use a statue/figurine of the Monkey King in feng shui. Some feature the monk with a Ruyi Jingu Bang (Golden hooped rod). This power pole symbolizing the Monkey King's ability to overcome obstacles.

You can add a monkey symbol to your feng shui design to assist in overcoming obstacles. Place your favorite figurine in the afflicted sector to reap the auspicious energies it attracts.