Feng shui rules advise against placing a TV in the bedroom. There are a few reasons why a television is inauspicious for a bedroom.

Using Feng Shui Rules for TV in the Bedroom

A television screen has the same effect as a mirror. Mirrors can be powerful tools when used in feng shui to redirect or magnify chi energy.

While feng shui strives to create a balance between yin and yang energy, the bedroom is the one exception. In feng shui, a bedroom is intentionally designed to have more yin energy than yang energy to induce calmness and relaxation. Yin energy is passive and a good energy to promote sleep.

Too Much Yang Energy in Bedrooms

A TV in a bedroom produces an enormous amount of yang energy. When there is too much yang energy in a bedroom and it overpowers yin energy, you won't be able to settle down enough to rest peacefully. Sleep is vital to your health and feng shui doesn't recommend having a television or any electronic equipment in a bedroom. 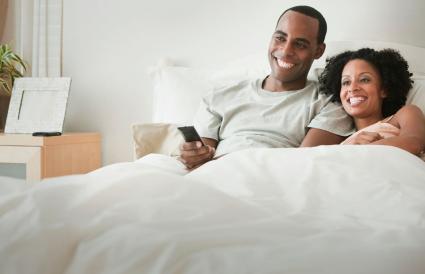 Long before televisions were invented, feng shui rules for bedrooms advised against using mirrors. Yang energy was always the main consideration, but there were also other reasons why mirrors were eliminated in bedrooms.

One of the most common reasons given for excluding mirrors in the bedroom involves astral projection. When the soul steps out of the body during sleep, it was often believed that a mirror reflection might startle the soul and risk physical harm to the body.

Invitation to Third Party in Marriage

Another reason often given for not using mirrors in the bedroom that reflect the bed, especially the master bedroom, is infidelity. The reflection of the couple sleeping in bed is viewed as an invitation for a third party (represented by the mirror) to join the couple. This is commonly viewed as an open invitation for infidelity. A television offers a large reflective surface in a mirror effect.

In feng shui, TVs are often used as metal elements due to their electronic components. Metal attracts the water element, one element not advised to be used in a bedroom. Water is considered yang energy in the bedroom and is one of the elements avoided in feng shui bedroom design.

The first thing a feng shui practitioner will recommend to anyone with a TV in the bedroom is to remove it immediately. If you suffer from insomnia or restless sleep, your television could be the culprit.

Another threat cited about televisions is the emitting of harmful EMFs. EMFs (Electromagnetic Fields) are generated by TVs at a very low level. However, newer smart TVs send out stronger EMFs than previous television generations. Watching a television at a distance or more than four feet lowers the exposure from EMF radiation.

Remedies for TV in the Bedroom

In a modern world of electronics, especially televisions, many people choose to have a television in their bedroom. There are a few remedies you can try to counter the yang energy and mirror effect a TV in the bedroom has.

The easiest way to block the mirror effect of a TV is to cover the screen with a towel or blanket before going to sleep. You may be surprised how quickly the quality of your sleep improves.

Armoire for TV in Bedroom

A popular piece of bedroom furniture is the armoire. You can place the TV inside an armoire and simply close the armoire doors before retiring for the night. This is the best solution for those who wish to have a TV in the bedroom.

Where to Place TV in the Bedroom

If you decide to keep or add a TV to the bedroom, you want to set it in the best possible area. Most TVs are placed directly across from the bed for easy viewing. Some prefer wall mounted televisions instead of an armoire.

Draping a cloth over a wall mounted TV may be difficult or simply inconvenient. An easy solution is to place a portable folding screen between the bed and TV to block the TV screen.

Following Feng Shui Rules for TV in the Bedroom