The main Chinese god of wealth is Caishen, who can be used in feng shui to promote prosperity. While there are several Chinese gods of wealth, Caishen is honored during New Year's Day celebrations and revered in Taoism.

As a revered god of wealth, Caishen is honored during the Chinese New Year. Believers seek his blessings for a prosperous year. His image can be found in various art forms. He is depicted as a true god with many attendants who serve as bearers for his belongings that include gold ingots, coins, jewels, and foods.

Who Is the Most Powerful Chinese God?

Caishen is considered the most powerful of the gods. One legend tells how Buddha made Caishen the supreme ruler of wealth and good fortune. As such, he has the ability to bestow good fortune and wealth to anyone he desires. Caishen has various names, such as Zhang Gong Ming and different spellings, depending on the region or country, such as Chai Shen Yeh and Cai Shen. It is believed that Caishen protects followers from financial losses and disasters.

There are many stories and various versions of the stories of Caishen, the Chinese god of wealth. The Chinese mythological accounts of Caishen portray him riding on the back of a black tiger. As the fabled god of wealth, he always carries a club or stick made of gold that has the power to transform iron into gold. Many of the stories about Caishen claim he was a true alchemist and understood how to transform metals into gold.

Who Is Cai Shen?

Many of the stories about the god of wealth, Caishen (Cai Shen) attribute the success of many Chinese historical pivotal politicians and military figures to his reincarnation as those individuals. For example, the legends of Bi Gan, uncle by marriage of King Zhou of Shang. Bi Gan was the son of King Wen Ding and tried to school his corrupt nephew in changing his ways. However, King Zhou was controlled by his aggressive thirst for power. The King eventually had his uncle executed. It wasn't very long before the nephew king paid the karmic price by losing his wealth and his Shang Dynasty. While the Taoists immortalized Bi Gan, honoring him as a Taoist deity, Zi, Bi Gan was later deified as Cai Shen.

Caishen is known as the god of fortune, god of wealth, and god of prosperity. Another story of how he became a god is found in the novel written during the Ming dynasty, Fengshen Yanyi, the story of how a hermit Zhoa Gongming used magic to bolster the failing Shang Dynasty during the 12th century BCE. Using black magic, Zhao was murdered by an arrow shot through the heart of his straw effigy. His murderer was required to carry Zhao's body to the temple and proclaim all of Zhao's virtues. Later, Zhao was canonized as Caishen, god of wealth.

You can incorporate Caishen in your feng shui celebration of the Chinese New Year. Traditionally, you can perform a ritual of receiving the god of wealth into your home. The most auspicious time to receive Caishen is usually on New Year's Eve.

Days before, you'll begin cleaning your home. You want to get rid of all clutter. If you have doors or windows in need of repairs, you need to complete these prior to New Year's Eve. The windows should be clean inside and out. The door should be well lit, so replace any burned out light bulbs.

Ideally, Caishen is greeted with the arrival of the new year. This when he arrives, so it's best to perform this ritual just at the time of the New Year is ushered in.

Dress for the Occasion

Once you have everything cleaned, it's time to get ready for New Year's Eve. You will dress up; after all, you're greeting the god of wealth and fortune and you want to honor him.

Before midnight, you should prepare to invite Caishen into your home:

Some people prepare a feast to share with the god of wealth on New Year's Eve. They set a place for him at the head of the table where they and their family/friends dine, celebrating the Chinese New Year. 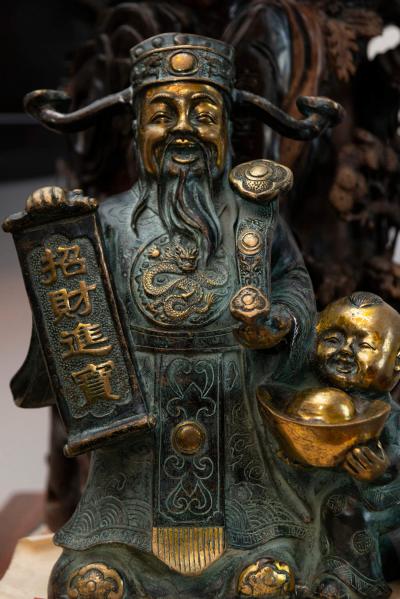 There are many depictions of the god of wealth, but the most widely used one in feng shui shows him riding or sitting on a black tiger while holding a Ru Yi scepter in one hand and a gold ingot in the other.

How to Activate Wealth Sector With Caishen

Place God of Wealth in Your Sheng Chi Direction

You will either place the god of wealth in the southeast sector of your home or office, or in your personal Sheng Chi direction. Once you determine where you wish to place your Caishen depiction, you need to ensure you correctly place it to ensure you benefit from his good graces.

Feng Shui and the Chinese God of Wealth, Caishen

You can use the Chinese god of wealth, Caishen in feng shui applications to attract greater wealth into your life. Once you place the statue or painting, make sure you keep it dusted and in good condition to ensure your good fortune continues.