The meaning of the fu dog (or foo dog) in feng shui is a symbol of protection. Most importantly, fu dogs are known as the Imperial Guardian Lions.

The Chinese fu dog is an ancient symbol that is supposed to depict a lion, but appears more like a stylized dog. Since lions aren't found in China, the stylized statues are more relatable to a canine, hence the moniker fu dog.

It's widely accepted that fu dogs were created sometime after real lions were presented to the Han court. According to The Met (Metropolitan Museum of Art), earlier depictions of fu dogs were more in keeping with the look of stylized lions like the one featured on The Met website. The featured partial statue had been paired with another one at the gate of the Eastern Han capital, Luoyang. The Eastern Han dynasty (second Han period) was from 25 AD to 220 AD).

The mythology that evolved around the fu dogs revered the creatures as the ancient mystical protectors of heaven. The ancient Chinese fu dogs were carved from stone, such as marble or granite. A pair of enormous fu dogs, one female (yin) and the other male (yang), were believed to stand guard on either side of the gates at the entrance to heaven.

Fu dogs are believed to be so fierce that they scare off all malevolent spirits and prevent them from entering the kingdom of heaven. A pair of fu dogs guards the entrances to Chinese palaces, temples and even garden gates. Any place considered important or sacred is usually protected by a pair of fu dogs, one female and one male.

How to Distinguish Fu Dog Genders

You want to place the correct dog gender on the correct side of your door or entrance. Distinguishing which dog is the female and male is easy once you understand the symbols you need to consider.

The female fu dog is depicted with her paw protecting her cub by placing it directly over the pup. The female fu dog symbolizes her maternal instinct to protect her baby. This same devotion, loyalty and protection translates to the home or business she protects. 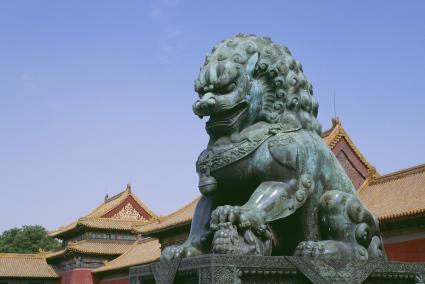 The male fu dog is depicted with his paw on top of a ball. Some depictions refer to this as a globe. It symbolizes the male fu dog's control over circumstances and how it effects your own private world. 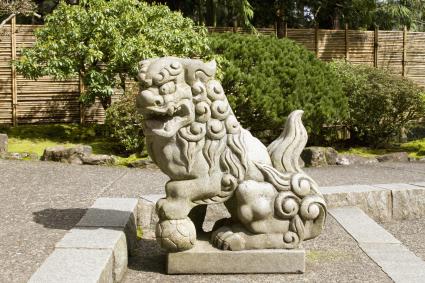 How to Display Fu Dogs

You can take advantage of the fu dog's protective powers and energies by placing a pair at your front door. You need a female (yin) fu dog and a male (yang) fu dog to establish the ideal feng shui balance of chi energies. You want to make sure both dogs are facing out, so they greet all who enter your home and scare off would be thieves, malicious individuals, evil spirits, and negative chi energies. A few quick steps ensure your fu dogs are placed correctly:

You can use fu dogs in your home or business to stave off inauspicious energies. This pair of protectors guard against robberies, thefts, evil spirits, and misfortune.