One of the Four Legendary Creatures, Japanese dragons guard the cosmic direction of the East. They are different from Chinese dragons but still have applications in feng shui.

In feng shui, Japanese dragons represent strength, power, and protection. They are often used as a powerful feng shui cure. Dragons are symbols of yang energy, the strong masculine energy of activity and creativity. A feng shui dragon symbolizes prosperity and success. When it holds a crystal or pearl in its claw, the dragon is an auspicious symbol of power, wealth and prosperity.

Since dragons represent the East, an ideal placement of a feng shui dragon is on the east side of your home or east sector of a room. However, dragons should not be placed in bedrooms, bathrooms, or closets since they symbolize activity and will draw too much energy flow to these areas. If they are placed in the relationship area of the home or space, a dragon should always be paired with a phoenix to ensure happy love relationships.

The dragon, and the eastern compass direction, also represent:

Over the centuries, the Four Legendary Creatures of Japan have merged with the Shitenno, the Four Heavenly Kings. The Shitenno are Buddhist guardians that also guard the cosmic directions. Avoid inauspicious metal dragons for feng shui use since fire melts metal.

The legendary dragons of Japan have a rich and significant history in the folklore and mythology of the country. This group of dragons is known as Tatsus and resembles Chinese dragons in many ways. One way to tell them apart by sight is by the number of claws or toes they have on each foot.

Just as the Chinese dragons, the mystical dragons of Japan have the power to shape-shift and move seamlessly from one form to another or become completely invisible. Many Japanese legends tell of dragons changing their size and shape as they magically transform into humans. Other legends tell of the reverse happening as humans transform back into dragons. 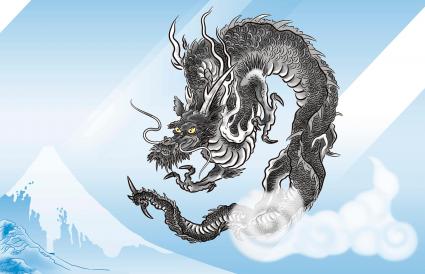 According to the Tale of Hori, Princess Toyotama-hime, also known as Princess Fruit Jewel and Princess Rich Jewel, married Hori no Mikoto, a hunter. For three years, the couple lived together in the underwater kingdom of the Princess before the hunter returned to his life in the upper world.

Before leaving the underwater kingdom, the Princess and Hori no Mikoto had a son. The son grew up and had four children. One of those children, a son named Kamuyamato Iwarebiko, became the first Emperor of Japan and was known as a human, Jinmu Tenno. In Japan, the dragon remains a symbol of imperial power.

Symbolism of Dragons in Japan

Dragon and the Phoenix

Dragons represent yang energy and the Emperor. They are the mortal enemy of the Phoenix, which represents yin energy and the Empress. Yet, when they are placed together in feng shui applications, the dragon and the phoenix create the perfect balance, representing the harmony of yin and yang. As partners, the two symbolize wedded bliss and conflict.

The symbolism of the dragon is found throughout the Japanese culture and is strongly associated with the realm of water and the underwater kingdom as a rain god. Other water symbolisms associated with Japanese dragons include:

Use the Japanese Dragon Wisely

Japanese dragons have fascinated people for centuries, and they will likely continue to do so for ages to come. They occupy a powerful place in the Asian culture and, when used wisely, can enhance the good chi energy in your home.