The salt water cure is one of the most important in a feng shui arsenal. This cure can counter the negative effects of the annual stars #2 and #5, considered the two negative energy culprits of traditional feng shui. These ill-fated stars move each year, so feng shui practitioners recommend an annual salt water cure.

How to Make the Salt Water Cure

It's easy to assemble your salt water cure.

The salt water cure will begin to crystalize along the rim of the jar. Depending on how afflicted this area is, the crystals can spread and completely cover the jar and the plate or tray. Be sure you have some type of protective cover or mat underneath these and that it is larger than the plate or tray.

Where to Put Salt Water Cures

Not all rooms in the home need protection from #2 and #5 flying stars, but some are vital to the family dynamics, wealth, and resources. When the #2 or #5 flying star falls into these rooms, you should be diligent about placing a salt water cure for the length of time these stars reside in the rooms. Not all rooms require the salt cure.

The main rooms in your home that are used on a daily basis are typically the most vulnerable to the negative impact of #2 and #5 flying stars. This usually include bedrooms, dens, home offices, living rooms, kitchens, dining rooms, breakfast rooms, sunrooms, foyers, craft room, media room, home theater, and all common rooms of the home.

Classical feng shui rules state if the #2 and #5 flying stars are located in the laundry room, bathroom, or a room that is rarely used, such as a guest room, then a salt water cure isn't necessary. The bathroom and laundry room carry out waste water, so the negative impact of either flying star is much the same as the normally existing inauspicious energy found in these two rooms.

The guest room that's hardly used has no significant impact to the family unless you have a guest using the room. In that case, you'd want to apply the salt cure.

How to Remove and Dispose of the Salt Water Cure

The salt water cure must be disposed properly. Never attempt to recycle any part of the cure. All the material has absorbed the negative chi energy. Get rid of it and out of your home once the flying stars have moved on.

To do this, seal the cure in a plastic bag and throw it into your outside trash bin for the next trash pickup. Never bury it on your property. This will anchor the negative energy into your land, so be sure to dispose of all related cure items, including the mat and plate/tray used to protect the floor or table surface.

Not all schools of feng shui use the salt water cure. The Flying Star School of feng shui created it. This is the feng shui practice of calculating feng shui star placements for homes for both auspicious and inauspicious stars.

Feng shui guru Lillian Too explains time dimension is part of feng shui and is governed by the nine numbers of Chinese numerology. These numbers are arranged on the Lo Shu grid (nine squares). In Flying Star feng shui, these numbers rotate through the grid in fixed patterns you can apply to your home via compass directions. These numbers are referred to as flying stars. Each one has a specific set of energies assigned to it.

The annual calculations for the negative stars #2 and #5 (inauspicious) are countered by the salt water cure. These calculations are based on the Chinese solar New Year.

The Chinese New Year is often referred to as Lunar New Year and shouldn't be confused with the Chinese solar calendar. The date to set your annual salt water cure is the Solar New Year. According to the Feng Shui Institute, this calendar defines when "...the Winter season and the old year ends, and Spring and the new year officially starts."

In many ancient cultures, including the Chinese, salt was considered to have cleansing properties and was used by various sects and religions. Salt was believed to ward off evil spirits and negative energy. 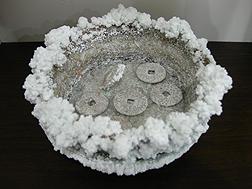 In the feng shui salt cure, the purification of salt is incorporated with water that when combined are a powerful cleansing tool. It's the addition of metal coins that helps stimulate the chemical reaction that cleanses and dissipates the negative chi energy brought into a home by the annual movement of the flying stars #2 and #5.

History of the Salt Water Cure

Feng shui master Michael Hanna of the UK introduced the (formerly secret) feng shui salt cure to the public over a decade ago. Some feng shui practitioners and masters believe the salt cure isn't a cure at all, but merely a tool to assess the severity of the afflicted area where the flying stars reside. Regardless which side of the coin you're on, the salt cure has become a common and popular one with many testimonies of its effectiveness as a feng shui cure.

The salt water cure should be replaced each year on the date of the Chinese astrology solar new year. This is the easiest way to ensure you have removed the old cure and replaced it with a new one. You aren't restricted to only setting up a cure on that one day. You can set up a new cure anytime during the year, just be sure you have the correct positions for the #2 and #5 flying stars.