The yin yang meaning and symbol date back to ancient China. The yin yang symbol represents the belief that everything in the universe consists of two forces that are opposing but complementary.

What Is Yin and Yang?

According to yin yang philosophy, the universe and everything in it are both constant and cyclical. In this infinite cycle, one force dominates and is then replaced by the opposing force. Examples illustrating the yin yang philosophy include:

The Yin Yang Symbol and Philosophy

The symbol of the yin yang, also known as the Tai Chi or Taiqi symbol, consists of a circle equally divided into black and white sections by a reverse S-like shape. Within the black section is a small circle of white. Within the white section is a small circle of black. Each of the individual aspects of the yin yang symbol has a significant meaning as does the entire yin yang.

Which One Is Yin?

The black area represents yin with the following characteristics:

Which One Is Yang?

The white area represents the yang with the following characteristics:

Meaning of the Black and White Color Sections

Together the black and white teardrops represent the interaction of the energies found in all things. They illustrate the cyclical nature of yin and yang and all that it represents as one energy transforms into the other.

The S-Like Shapes of the Two Areas

Instead of a harsh straight line dividing the two halves, the line is a soft S-like shape with flowing curves. Both sides yield to one another and push into each other illustrating the dependence upon each other. As yin swells in size and height, the yang begins to emerge. As yang continues to swell in size and height, yin emerges once again showing that each sustains the other in their never-ending cycle.

According to Taoist principles, the forces of everything in the universe are in constant motion. As the movement continues, each of the forces of energy gradually changes into the other, yin to yang and yang to yin. This is the cycle of all energy. 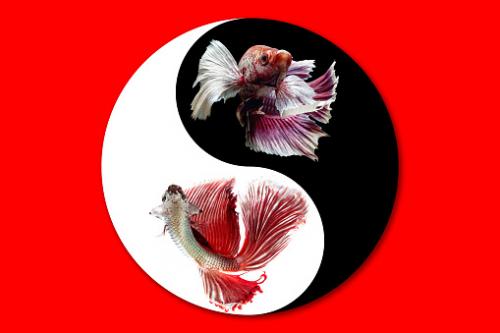 The meaning of the yin yang symbol encompasses how, when combined as one, these two opposite energies create harmony and balance within the universe. Theses energies exist in all living matter and are the basis of life since nothing can exist by itself. The yin yang symbol is an excellent interpretation of life and how each action, characteristic, and aspect has an opposite that is its equal. One cannot exist without the other. This requires a positive and a negative to complete the whole.

When these opposite energies work in unison the way nature dictates, there is a perfect balance. The yin yang symbol of equal halves, one dark and one light, but also opposing forces come together to create and generate energy - life. Yin creates the form and grows it while the yang generates action energy and expands it. This is the bringing together of two halves to make a complete whole.

Yin yang (chi energy) is the driving force of feng shui philosophy. Every aspect of feng shui is focused on maintaining and in all cases re-establishing the balance of yin yang in the home and the surrounding environment. If the chi energy is out of balance in a home or work environment, the occupants can suffer illness, financial loss, career obstacles, and relationship problems. Feng shui principles address each of these areas and more through the proper application of remedies designed to restore the harmonious balance between yin and yang energies.

You can witness the perfection of yin and yang in nature. There is birth (spring), growth (summer), aging (fall), and death (winter). The cycle then begins anew with spring. This is nature's cycle of existence in balance and harmony.

Other examples of yin yang: 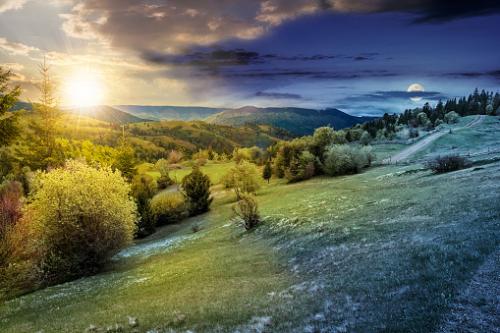 Feng shui uses the principles of yin yang energy to ensure the chi energy moving in and throughout your home finds a harmonious environment and your home maintains a balance between yin and yang energies. For example:

Actionable cures for unbalanced yin and yang situations apply to human created issues as well as natural ones. Using feng shui principles, you can avoid creating issues that will then require remedies or cures.

This concept is beautifully illustrated in examples of yin yang art created in many types of art forms. Yin yang art includes subjects such as: 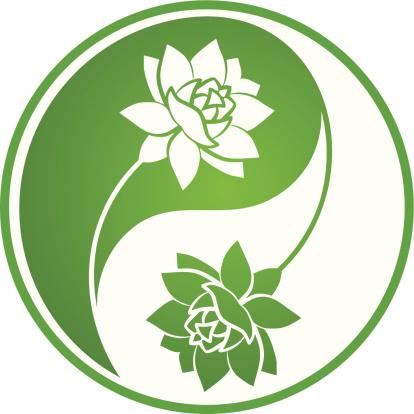 The meaning of yin yang is illustrated through the duality of nature. When uninterrupted, these natural occurrences signify the perfection of chi energy completed by its two halves, female (yin) and male (yang). This creates balance and harmony in all forms of life.