Koi fish symbolism (pronounced coy fish) is common in both Chinese culture and feng shui, depicted on artwork, clothing, tattoos, and even with live fish used in landscape design. By knowing the koi meaning and long history, you can more easily understand why people revere this beautiful fish so deeply.

What Is a Koi Fish?

Koi is the Japanese word for carp, a brightly colored type of freshwater fish commonly used in Asian landscape and design, including Chinese feng shui. The fish come in a variety of colors and have symbolic meaning in feng shui. 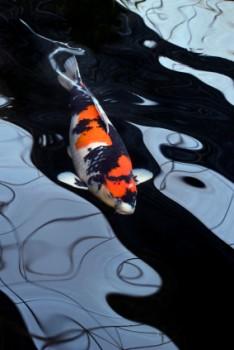 Many of the attributes of the koi symbolize several lessons and even trials individuals often encounter in life. The koi fish has a powerful and energetic life force, demonstrated by its ability to swim against currents and even travel upstream. Some of the characteristics associated with the koi include:

Many of the above described symbolic meanings of koi fish stem from the Chinese legend of the Dragon Gate in which a koi fish swam upstream, through waterfalls and other obstacles to reach the top of the mountain. At the top of the mountain was the "Dragon Gate." The legend says that when the koi finally reached the top, it became a dragon, one of the most auspicious creatures in Chinese culture.

The fish's coloring also has something to do with its symbolism. Certain colors represent certain aspects or outcomes in life.

This koi has a white body with red spots. It symbolizes success in your career.

There are two main variations of this koi. One variation is a koi with a white body and black spots, and the other is an all black body. This Kumonryu koi symbolizes life changes and transformations.

This white and red patterned koi is often referred to as the "lipstick" fish, because the red coloring around its mouth makes it appear as though the fish is wearing lipstick. Kuchibeni koi represents love and long-lasting relationships.

The Yamabuki koi is gold in coloring and symbolizes riches and wealth.

The koi is synonymous with harmony and happiness. The two yin and yang koi complete each other and create a perfect balance of the negative and positive energies of chi energy, which is the life-force of all things on earth.

What Do Koi Fish Symbolize in Feng Shui 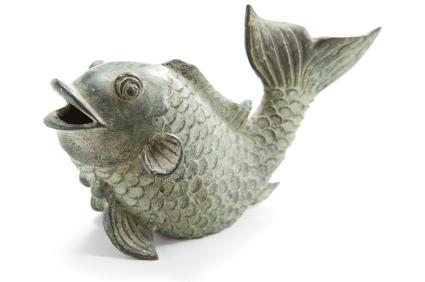 Koi can be represented in interior design with artwork such as paintings, drawings, photographs or sculpture. Its placement is said to attract auspicious abundance and prosperity into your home and life and some opt to have multiple representations of this fish.

Koi can be included in a home either in a pond or very large aquarium. If you are considering raising a koi on your own, be sure that you always usher auspicious energy your way by keeping the water fastidiously clean and well-filtered and by ensuring they have ample space to swim and grow.

3
Comments
© 2006-2020 LoveToKnow, Corp., except where otherwise noted. All Rights Reserved.
What Do Koi Fish Symbolize?