The Tao embodies the duality of the universe and the enlivening chi at work to balance opposing forces often represented by the tiger and dragon. Chinese mythology expresses these two forces of the Tiger and a Dragon, or yin and yang, as perfect complements. In feng shui, the dragon and tiger are important both inside and outside the house.

The Tiger and Dragon are Celestial Animals, credited in Form School feng shui with complementary energy and special status in landscaping for well-being and good fortune.

The Tiger represents the yin or female chi, the direction West, the color white, and the element metal. It is an embodiment of purpose and patience (much as a tiger deliberately and patiently stalks its prey). Its power is coiled and hidden deep within but a tiger can spring into action with transformative, even deadly force at will. Tiger is assigned to the right side of your property as you face out from the main entrance. That part of the environment or landscape should be lower than the left side because the Tiger is an earth creature and more grounded than the Dragon.

Opposite of Tigers: Yang Dragon

Dragon energy is male, bold, extroverted, and sky-centered. The green Dragon's direction is East and its element is Wood. When evaluating the landscape, Dragon is located to the left of the property as you face out from the front door. This area should be higher than the right side of the property. Features might include a hill, a slope, an extra story, a raised porch, or a tall tree. The Dragon is fiery and destructive but its force is tempered by the Tiger energy. So, the yin-yang of these two powerful creatures creates a perfect balance.

Symbols of the Tiger and Dragon in Mythology

Pulling the energies of the Tiger and the Dragon into the yin-yang symbol visualizes the interplay of light and dark energy. Typically, the light half of the symbol contains a drop of darkness and the dark half is punctuated by a drop of light. A Tiger and Dragon yin yang illustrates the ancient principle with depictions of the colorful creatures. The yang Dragon is set against the yin Tiger in a swirling dynamic curve. 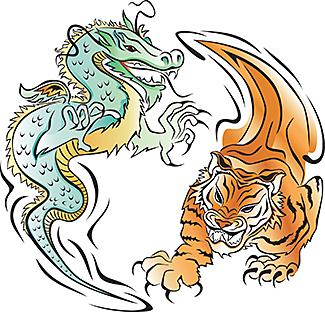 Compass School feng shui reverses the orientation of the Tiger and Dragon. So you may see the Dragon on the left or West of the circle, facing East, and the Tiger in the East or right side, facing West. The Celestial Animals retain every bit of their fierceness, no matter which school employs them symbolically. The tension between them is the tension of the forces of light and dark in the world, each holding the other in check.

Use the Tiger and Dragon to Improve Your Personal Chi

It's possible to improve your personal chi by studying the orientation of the Tiger and Dragon and applying it to your furniture placement.

Tap Into the Power

Draw the yin-yang energy of Tiger and Dragon into your life with framed paintings or sketches, jewelry, sculptures or other representational art. Feng shui your landscaping to emphasize aspects of Tiger and Dragon power surrounding your home. The mythical and the real creatures are both magical and majestic. Allow that energy to infuse your environment, attracting more positive chi and balancing all the forces of light and darkness around you.