Since ancient times phoenix mythology has existed in cultures throughout the world. The Phoenix has significant symbolism in feng shui applications.

As the young phoenix rose from the ashes it quickly grew with grace, power, and strength. The legendary bird of the sun also represents the four Confucian virtues:

One of the four celestial animals, the Chinese phoenix is rich in symbolic meaning. The mythological bird is the bearer of auspicious energy. For example, its symbolism represents:

Representing yin, the Phoenix is often paired with a dragon which represents yang. Together, in feng shui, the dragon and the phoenix present a balance of yin and yang that perfectly complement each other. 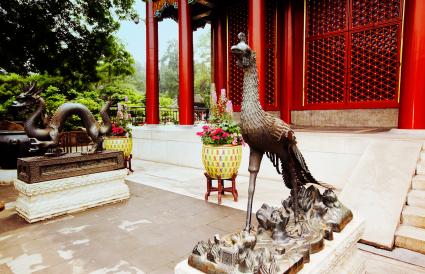 In total balance, the dragon and the phoenix create a happy celestial couple. A statue or painting of a dragon and a phoenix is a symbol of marital bliss and everlasting love. It also strengthens and rekindles relationships.

The Myth of the Phoenix

You can find the legend of the Phoenix in various cultures throughout history. One of the most popular versions is that of the ancient Greek culture. According to Greek phoenix mythology, the mystical bird lived in Arabia.

The Legend of the Phoenix

According to ancient legend, when the firebird of the sun, called the Phoenix, grows old and tired and is nearing the end of its life, it builds a pyre nest of spices and beautiful smelling branches. Once the nest is completed, the Phoenix sets it on fire. As the fire rages, both the Phoenix and the nest are reduced to a pile of ashes.

After several days a young phoenix rises from the ashes, ready to begin life as the solitary phoenix of the time. The young bird carefully gathers the ashes of the old Phoenix placing the remains into a myrrh egg. The new Phoenix carries the egg to the city of the sun named Heliopolis where he places it on the sun god's alter.

Nature of the Phoenix

The beautifully colored phoenix, with its vibrant gold and scarlet plumage, is now ready to spend its life singing a beautiful melodious song to the sun every day. The magnificent gentle bird, often described as eagle-like, does not kill anything, living completely on dew. In its gentleness, it never crushes anything that it touches.

Other Names for the Arabian Phoenix

Throughout the centuries, the Arabian phoenix has been referred to by many names.

The Phoenix in Different Cultures

The popular mythological accounts of the Phoenix, or its counterpart, existed in many cultures. In each culture, the birds are all identified with, or connected to, the sun. The following are examples of the many countries and cultures that share the legend of the bird of the sun and the names the bird is known by:

Common Variations of the Legend of the Phoenix

The following are several of the most common variations of phoenix mythology:

The Chinese phoenix is known as the Fenghuang. In ancient times, the male phoenix was called feng and the female birds were called haung. In later times, the distinction of gender was ignored, and the bird was simply referred to as she. The Phoenix became the symbol of the Empress. The description of this mythological bird is said to have:

The Phoenix is a powerful feng shui symbol. It has multiple uses in different luck sectors. When used properly, the Phoenix is believed to bring auspicious chi into your home and life.