The history of Chinese iron Buddha post-dates the migration of the Buddhist religion into ancient China. Iron Buddhas play an interesting role in Chinese beliefs and spirituality. For a Buddhist, the iron Buddha statue is typically an altar centerpiece. In feng shui, it's believed an iron Buddha will increase the flow of chi where it is enshrined and bring prosperity and great fortune to those in the home or temple.

Iron Buddhas Were Covered With Gold

Crafters cast an iron Buddha from a mold in various depictions of the Buddha during his stages of enlightenment. After the casting cooled, the crafters gilded the iron Buddha in either gold or bronze. During the reign of Emperor Wu, soldiers stripped the gold iron Buddha statues of their gold and crushed the iron remnants. They then melted the gold and stored it in the state's treasury. The effort to eradicate Buddhism from the Chinese culture didn't stop at the defacing of iron Buddha statues or the tearing down of temples. The Buddhist monks and nuns under the age of forty were defrocked and sent back into the population, not as holy men and women, but as average workers. It was not an easy transition for people devoted to a non-material life. In this campaign against Buddhism, only a handful of Buddhist establishments and temples were spared. 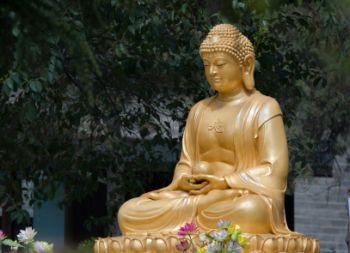 Temples With the Iron Buddha

All Buddha Temples house Buddha statues. Most have at least one iron Buddha. Some of China's Buddhist temples have antique iron Buddhas.

Built in 685, the temple covers 78,000 square meters. It was designated as a key national temple in 1983. The largest iron Buddha in China, the Vairochana Buddha, is enshrined within the temple walls. Vairochana means brilliant and luminous sun and this depiction of Buddha is considered the personification of wisdom and Buddha as the ultimate teacher.

This temple was originally called the Baoguo Temple and was also known as the Iron Buddha Nunnery. It was founded during the early 1200s. The temple was named in honor of its big iron Buddha which was cast during the Ming Dynasty.

First built during the Southern Dynasty (420 - 589), the Nengren Temple is located in the centre of Jiujiang City, Jiangxi Province. It's one of the most protected temples in China. It houses an iron Buddha statue posed in a sitting position on the Stone Boat, a large sculptured stone. Legend claims that during the Song Dynasty (960-1279) a monk had a dream about an iron Buddha who ferried the stone boat across the river. The iron Buddha was later destroyed and when it was finally replaced, a concrete Buddha statue was used instead of another iron Buddha.

The Puxian Temple burned down many times over the centuries and was always rebuilt. There are three thousand iron Buddhas inside the temple.

Tale of the Iron Buddha

South of Kiang-hia is the convent of the Iron Buddha. Legend states during the time of the Teang Dynasty, there was a species of spider that was red and white and could shape shift into bewitching women who seduced the local men. The Iron Buddha was cast in an effort to exorcise the demon spiders since it's believed that iron repels demonic spirits. 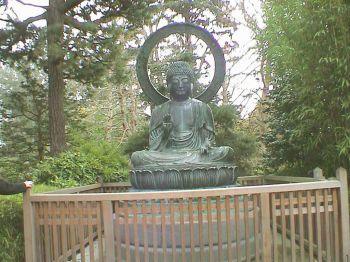 Add an Iron Buddha to Your Garden or Home

Iron Buddha can act like a magnet and attract good chi energy. Try placing this potent feng shui element in the current most auspicious sector of your garden or home. This would typically be the North sector of your garden; however, you need to consult the flying stars analysis for your home before placing the statue. Iron is a metal and will attract water elements wherever it is. North is typically the best place for a metal object, but sometimes the flying stars may dictate an atypical element; like in 2002 when wood was the cure element for inauspicious flying stars in the North sector.

In choosing an iron Buddha, you can opt for a painted one, a gilded one or a plain one. If you select a plain iron Buddha you can have the pleasure of allowing the natural patina process to age it.

You can purchase antique iron Buddhas or modern depictions for your garden or home.

You can honor the history of Chinese iron Buddha by choosing a replica or antique for your home.

0
Comments
© 2006-2020 LoveToKnow, Corp., except where otherwise noted. All Rights Reserved.
History of the Chinese Iron Buddha