Feng shui symbols can be used to enhance and attract certain energies into your home. From health to love, utilize feng shui symbols to focus on activating positive elements.

There are several popular feng shui symbols used to attract or protect your health or guard against illness. You'll want to place health symbols in the correct area of your home for optimum results.

You may have heard of lucky bamboo and wondered what it means. People consider bamboo as lucky because it represents all five of the chi energy elements. The lucky bamboo is a misnomer because it's not really bamboo, but a variety of the dracaenas family. 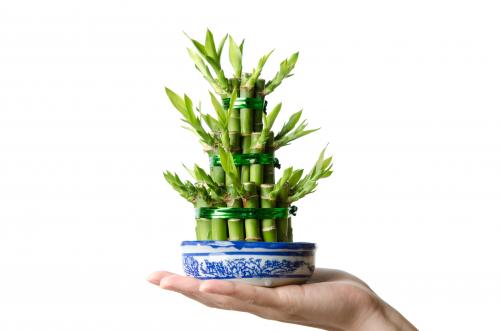 This plant comes in arrangements of stalks and each number has a meaning in feng shui philosophy and the kind of energy it brings to your home.

Several health symbols are also available as art objects, such as the lucky cat. Many Chinese believe that by displaying a lucky cat, especially one that with its right paw raised, will protect their families from illness.

Three Lucky Immortals, Fuk (also Fu), Luk (Lu) and Sau (Su) weren't really immortal. The Chinese gave them the title so their good deeds were forever remembered. People use these figurines as symbols of happiness, wealth and health.

The mythical creature, Chi Lin has the body of a horse and the head of a dragon. This Chinese creature draws blessings and surrounds your home and all who live there, in a protective energy.

Through the movement of people in Asia, many aspects of the Japanese and Chinese cultures have crossed over into the other. For instance, the Japanese mythological crane that lived for 1,000 years over time became a feng shui symbol for a long and healthy life, like the fabled crane. Many people use this symbol to ward off illness.

The mythical deer is a symbol of longevity and endurance. Many believe that when you place this symbol in your health sector of your home, you'll enjoy a long life free of disease.

Another myth popular in the Chinese culture is that of the tortoise (turtle) that lives for 3,000 years. People use the tortoise to bring good physical health, but it can also bring health to an ailing or dying career and other areas of your life, such as a relationship.

The peach is the fruit of the gods. It bestows immortality to those who eat it. It is a powerful health symbol believed to not only prevent illness, but restore health to the sick.

There are two symbols that are the most powerful ones used in feng shui applications as remedies or cures. You can place these in your health sector or use in rooms that are afflicted with negative flying stars.

The Dui Trigram brings forth the Heavenly Doctor who can cure the Star #2, one of the most inauspicious flying stars. A handful of masters guard the secrets of the Dui Trigram. These masters can use this health symbol to restore health to the diseased.

The Wu Lou has been a long-time favorite feng shui cure for malevolent flying stars. The Wu Lou will prevent you from becoming sick if you must sleep in a room (direction) where the negative flying star(s) are visiting. Many feng shui practitioners will place a pair of Wu Lou, often made out of brass or gold covered ceramic, for extra promotion of good health. 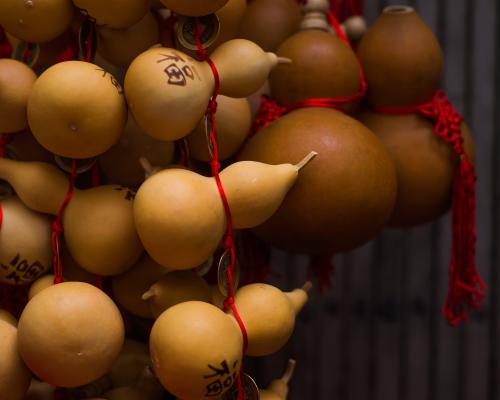 Twin Wu Lou that grow co-joined are rare. Whenever this occurs, sellers get outrageous prices for them since a co-joined Wu Lou is highly potent. The twin co-joined Wu Lou blesses you with twice the protection of a single gourd from disease.

Throughout feng shui applications, you'll find the pairing up of symbols for love, especially marriage. The most obvious reason is the symbolic representation of a couple. In addition, many believe the pairing of symbols doubles the luck and happiness of couples.

One of the most recognized symbols of marital bliss is the Mandarin ducks. A pair of Mandarin ducks is placed somewhere in the couple's bedroom. This particular breed of duck was one of the emperor's favorite. The Chinese culture quickly adopted them as a symbol of a blessed and fortunate union. You can use either a painting of a pair of ducks or two paintings, each with a single duck yet the two paintings displayed together. You may prefer to purchase a pair of duck figurines for your nightstand.

A long-standing symbol of love and beauty, many believe the peony to be a kind of love potion. The Chinese women either wear the flower in their hair or pinned to their clothing. Couples use peonies as symbolic love enhancers, believing the presence of peonies attracts abundance and stronger feelings of commitment. 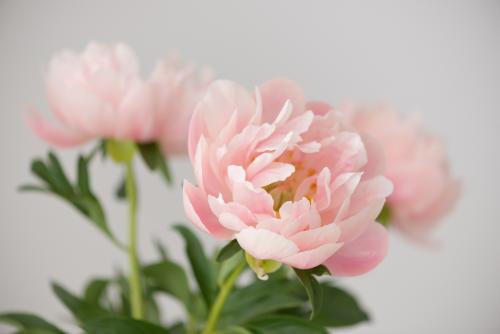 The symbolism of the dragon (man) and phoenix (woman) originally represented the emperor and the empress. Many viewed the royal couple as very lucky and so the desire to emulate them grew.

Many believe that quartz crystals bestow positive energy to those who wear them or place them in their home. The rose quartz crystal is in tune with the energy of the heart chakra, this is why artisans often carve this quartz into the shape of a heart.

Many symbols represent blessings, abundance and wealth. You can use these symbols in various areas of your home. Place one in your career sector to activate positive energies or add one to your wealth corner for an income increase.

Coins tied with a red ribbon is one of the most popular and widely known symbol. The number of coins used is typically three or six. The preferred dynasty coins are from the I-Ching dynasty known for being a positive one. Never use coins from a tyrannical evil dynasty.

This combination of mythical creature has the head of a dragon and body of a turtle. The dragon turtle attracts wealth and success in whatever sector you place it. Place a Chinese coin (I-Ching Dynasty) in its mouth and enjoy the positive energies it brings to you. 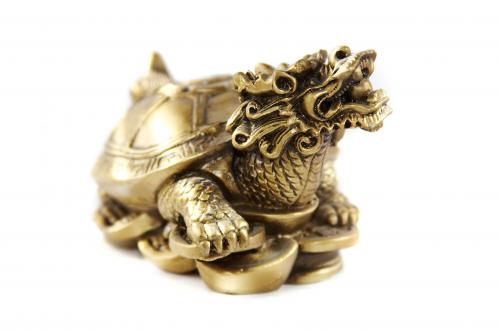 Fu dogs are a powerful symbol that also originated in the Emperor's palace. The Emperor charged his artists to come up with a symbol that would deter possible thieves. Out of this command came the enormous guard dogs that are a stylized mixture of lion and dog. Over the centuries, the fu dogs grew to represent power, wealth and protectors. Businesses and homeowners place a pair (male and female) outside the front entrance to guard against theft and loss.

Red envelopes are conveyors of good luck and blessings. The Chinese tradition of placing coins inside red envelopes is tied to the myth about a young man who slayed a dragon. The grateful villagers gave him coins sealed inside a red envelope. That's why you'll often find a dragon depicted on the outside of the envelope.

An ingot is a symbol of wealth symbol you place in your home to help troubled finances and increase opportunities.

The three-legged toad is an auspicious wealth symbol. Like the dragon turtle this one also has a Chinese coin in its mouth.

There are numerous good luck charms or symbols. You can use them in almost any sector of your home to help draw positive chi. Various animals have long been the omens or symbols of prosperity, good luck and even the ability to grant wishes.

In feng shui, practitioners use numerous symbols as cures, but you can also use them to help you remain mindful of the influences you wish to invite into your life. When using a feng shui symbol as a cure, it is important to consider the material from which it's made. The element of wood, fire, water, air or earth is the activator of another element.

As you can see, there are many symbols you can use to enhance your environment and assist you when applying feng shui principles for a better flow of chi energy.