Golden Ratio examples can be found in everyday life including nature and in manmade artifacts as well as buildings and even music. Examples of Golden Ratio, also called the Divine Ratio, reflect its infinite number that can't be used as a whole number or fraction. The number is written as 1.62, an abbreviation of 1.618033989. This numeric value is known as Phi. You can find the Divine Ratio in all of nature. Mathematicians, musicians and artists also use the Golden Ratio. Due to its unique properties, many believe the Golden Ratio, Golden Rectangle (also known as the Golden Proportions), and the Golden Triangle to be divine.

The Golden Ratio creates nearly perfect beauty in nature and art. When you start looking for examples of the Golden Ratio examples in everyday life, you may be surprised by the many instances it has been used by mankind to create some monumental buildings and structures. When used in architecture, the building is said to be created by using "sacred architecture."

Phidias, the Greek sculptor, used the Golden Ratio in his work, especially when he began to work with the bands he sculpted just above the Parthenon columns. It's also important to note that the numeric value assigned to the Golden Ratio, Phi, was named in his honor.

If you measure the dimensions of the Parthenon's exterior, you'll discover that it not only forms a Golden Rectangle, but that there are also many Golden Rectangles between the columns. The use of the Golden Ratio accounts for the genius and beauty of this example of sacred architecture. 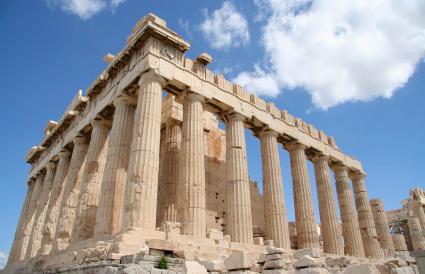 You can find many examples of ancient to modern sacred architecture that have the Golden Ratio in them:

Examples of the Golden Ratio in Art

It is known that within a Golden Rectangle are certain areas that are more visually appealing than other areas. These points are discovered by drawing a line from the bottom corner of the rectangle to the opposite corner and repeating it with the other bottom corner. These lines will intersect at the exact center of the Golden Rectangle. Next, measure the midway along each line starting from the center point. These four points are called the eyes of the rectangle (Golden Ratio). The main focus of the painting is then drawn or painted within these points of interests (ratios).

Examples of artwork featuring the Golden Ratio include: 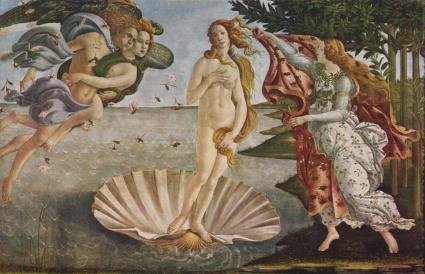 Music is composed of numeric value and when the Golden Ratio is used to create a musical piece, it becomes a living example of math. The Fibonacci Sequence is also prevalent in music:

The sequencing continues throughout a piece of music and becomes more complex as it reaches the Golden Ratio.

Composers Who Used the Golden Ratio

A few of the classical composers used the Golden Ratio and Fibonacci Sequencing in music pieces including Bach, Beethoven, Chopin, and Mozart. Some modern composers like Casey Mongoven have explored these age-old truisms in their music.


Nautilus seashellA Fibonacci Spiral can be created by using the Golden Ratio. This is a phenomenon that's found in nature. A plant's leaves grow so as many as possible can spiral up the stem. A new leaf only forms after the one proceeding it has formed. 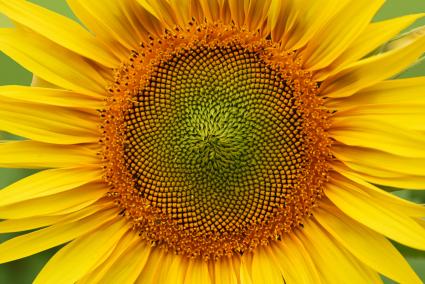 Flowers With the Fibonacci Sequence

Some flowers that have flower petals that follow the Fibonacci Sequence: 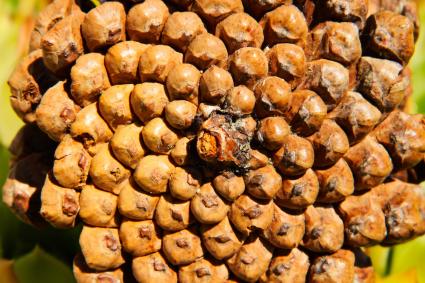 Fibonacci in Other Plants

The unique pattern of a pineapple is composed of diagonal shapes with eight moving in one direction and 13 in the opposite direction.

This ratio is also important to not only how humans view one another, but also in how their bodies work.

Humans and Concept of Beauty

The human body and facial construction are considered beautiful the closer the features and bone structures are to the Golden Ratio. The number five and phi have been found to be the basis of the human body. 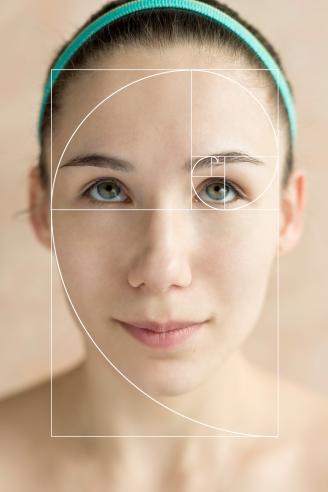 The Math Behind the Golden Ratio

The Golden Ratio can be found in real life. It is a mathematical truism that's used to define what's commonly known as the perfect number found in nature that has been duplicated and imitated by humans for centuries. The simplistic beauty of this number disguises its complexity in execution. To understand the theory behind the Golden Ratio, you must first explore the Fibonacci Sequencing of the ratio.

Fibonacci Sequence and the Golden Ratio

The Fibonacci Series math is simple: 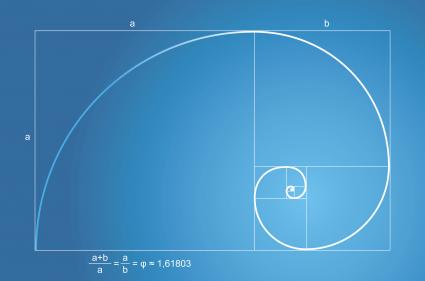 Creating a Golden Rectangle and Triangle

To create a Golden Rectangle with the Fibonacci Sequence, you start with a square. You will begin to build a rectangle by adding another square to the original square. Remember to use the formula: 0+1=1 is the first square, 1+1=2 - you'll add another square. 1+2=3 you will add three squares and next, 2+3=5, you'll add five squares. You'll continue to add squares and eventually form a Golden Rectangle.

A Golden Triangle can be created by bisecting a Golden Rectangle from one corner to the opposite corner. This creates a triangle where its three sides or angles have a 2:2:1 proportion, meaning the two long sides are equal in length and the short angle is exactly one-half the length of the two longer ones.

The Golden Ratio is often referred to as the Divine Ratio. It's easy to understand why this mathematical phenomena is considered divine. The complexity and consistent presence of the Golden Ratio in all of nature astounds and leaves the world in awe.

0
Comments
© 2006-2020 LoveToKnow, Corp., except where otherwise noted. All Rights Reserved.
Examples of the Golden Ratio in Art and Nature