From majestic statues and colorful paintings to calligraphy scrolls and detailed drawings, each Chinese dragon symbol represents the power of the auspicious mythical creature and the cosmic sheng chi it releases through each breath. You can tap into this tremendous dragon power when using this iconic symbol in your feng shui applications.

How the Symbol of the Chinese Dragon Evolved

Although no one really knows the origins of dragon lore in China, experts do agree on where the symbol of the dragon originated. The dragon symbol evolved from the emblems used by the ancient tribes of China. Archeologists do not agree, however, on whether the dragon came from the symbol of a fish, a crocodile or a snake. Chinese legends, art, folk stories, and archeological finds support each of the theories with most experts supporting the theory of the fish.

Those that believe dragons evolved from crocodiles compare the crocodile's ability to sense coming rain or the changes in air pressure to the dragon's ability to change the weather. 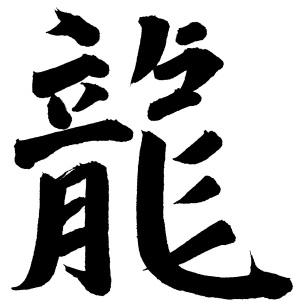 The Legend of the Carp

As legend tells a carp once saw a mountain and wanted to visit it. The determined fish swam upstream, over waterfalls and through rapids to reach the mountain. The carp came upon a mythical Dragon Gate, successfully leaped over it and became a dragon. Chinese dragons are strongly associated with moving water such as rivers, oceans and waterfalls. They are known as the lords of moving water.

Unlike the dragons found in the western culture, Chinese dragons are gentle, friendly and wise. Depicted as mythical dragon drawings it is easy to understand why these beautiful creatures, the dragons of China, were loved and worshiped.

Considered the angels of the Orient, the dragon symbolizes the natural forces of nature. yin yang dragons symbolize the balance of all things in the universe.

The Chinese dragon, known as Lung or Long, symbolizes many things including:

In Chinese mythology there are nine classical types of dragons.

The earliest symbol for the dragon appeared in ancient China, during the Yin and Shang dynasties, between the 16th and 11th century B.C. These early Chinese hieroglyphics were found on turtle shields and bones between inscriptions.During the Han dynasty, from 206 B.C. to 220A.D, the colors of Chinese dragons each had a different symbolic meaning. For example, turquoise dragons symbolized the following: 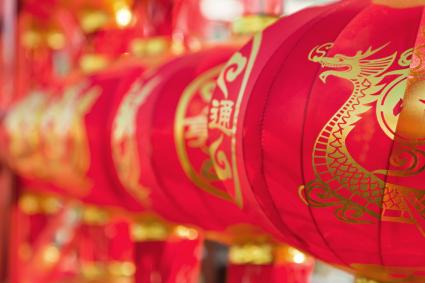 Chinese Zodiac and the Dragon

The dragon is the fifth animal sign in the 12-animal Chinese zodiac. Those born under the dragon portray many of its characteristics, such as being highly successful, lucky, authoritative and a very honorable individual.

The dragon is your Chinese zodiac animal sign if you were born:

Use Zodiac Dragons in Feng Shui

You can capitalize on your Chinese zodiac animal sign of the dragon in feng shui applications. Choose a dragon representation in art, a figurine or jewelry.

The Chinese Luck Dragon in Your Home

The Chinese symbol for the word dragon, as shown on the top right-hand side of the page, is one of the most complex of all the Chinese symbols. The symbol, called a hanja, is popular as a calligraphy scroll wall hanging, painting or drawing. Hanging artwork of the symbol for dragon brings the power and protection of the dragon into your home while increasing the flow of auspicious chi.Calligraphy scrolls are often made on rice paper using a special ink or the symbol is painted onto white brocade. The Chinese Calligraphy Store offers a beautiful selection of dragon calligraphy scrolls with a nice selection of symbols for various kinds of dragons.

If you know the zodiac element(s) that go with your zodiac animal you can select the appropriate color that matches the element, such as green for a wood dragon or blue for water dragon. If you wish to buy a dragon statue for a specific sector, such as fame and recognition (south sector), you select one based on this instead of your zodiac element to boost your fame with a red (fire) dragon.