The bagua diagram is an essential feng shui tool used in determining the areas in your home or office that directly correlates to your nine major life areas. The bagua is divided into eight compass directions with eight trigrams. These wedges are known as guas. A ninth gua is found in the center section of the eight guas. Each of the nine areas corresponds to one of the nine major areas in life.

Known as the Early Heaven Sequence, the legend/history of this bagua credits Fuxi (also Fu Xi) as its creator. Fuxi is believed to be a mythical being who created the art of writing. He is also said to have taught mankind how to fish and trap. As Fuxi explained yin and yang as a black fish (yin) and a white fish (yang), he also gave each sector of the Early Heaven Bagua a name (gua). Fuxi also revealed the meaning and significance of each gua as well as its compass direction with South always being positioned at the top of the bagua. These included: 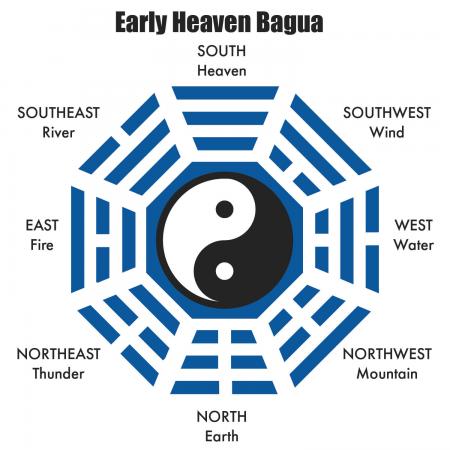 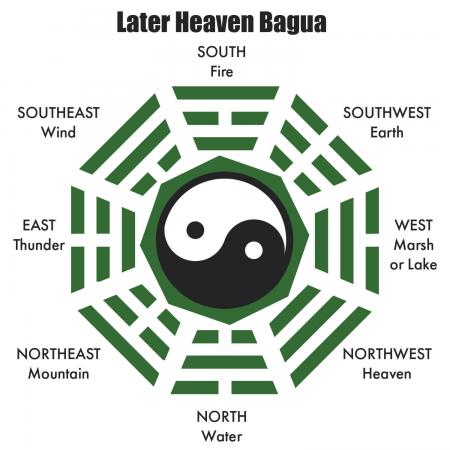 The bagua used today took time to evolve and originally came from the magic square known as the Lo Shu (or Loshu). This bagua was dubbed the Later Heaven Sequence since it represents the manifestation of the bagua for earthly applications. This manifestation is the cycling of birth, death, rebirth. It replicates the cycle of the day turning into night turning back into day. From this bagua came the creation of the Chinese calendar, time dimension feng shui, geomancy, astrology and much more. It was the result of the Earth and Heaven coming together to create the world - all life. This bagua is the practical application of the Early Heaven Sequence within the reality of an imperfect world.

The Later Heaven Sequence bagua represents this union between heaven and earth and their six offspring personified as sons and daughters. Each gua was imbued with one of these genders and placed in birthing order. In this bagua, it is easy to see the beginning of the five elements theory and a few of these early element assignments to compass directions.

The Bagua Map is used in Black Hat Sect Feng shui. To use the bagua map, it is necessary to have a basic sketch of the floor plan of your home or office. Follow these bagua map instructions to apply this map to your home layout with the application of Black Hat Sect rules.

How to Use Gender and Compass Directions

You can use the Later Heaven Sequence bagua gender assignment to compass directions when tackling problems family dynamics. For example, if the eldest daughter is having difficulties or there is discord between her and the family, then you would first analyze the southeast sector. This is the sector that is assigned to the eldest daughter. You want to ascertain if there is an imbalance or some affliction.

When you discover what is creating the imbalance in a sector, you can correct it by using feng shui principles and applications to balance the chi energy in this area. In the example of the southeast sector, keep in mind that it also governs wealth, so any corrections in this area will also remedy any afflictions affecting the wealth sector. This double governance of compass sectors over life sector and child or parent is a good barometer for how well any cures or remedies have been applied. You should notice an auspicious change in either one or both.

Learning to Use Bagua Diagrams

Once you understand which bagua you need to use, you can begin improving your life. The bagua diagram is a valuable feng shui tool that can be used in the evaluation and adjustment of sectors in your home or office to improve various areas of your life.

1
Comments
© 2006-2021 LoveToKnow, Corp., except where otherwise noted. All Rights Reserved.
Resources, Advice & Tips for Covid-19
Read More
Bagua Diagrams and How to Use Them