In feng shui philosophy, based upon the Chinese culture and belief system, the dragon symbolizes prosperity and abundance. The dragon, also spelled in Chinese as lung, long, or loong, is powerful and can overcome all obstacles because it's valiant and heroic. It's also a great protector of the people and their wealth.

The ancient China dragons were considered gods. This historical symbol, dating sometime around 5,000 BC, became the crest of the Chinese emperor. Only the emperor was allowed to use the dragon symbol. Ancient Chinese emperors laid claim that they were descendants of the dragon gods. This bloodline became an ethnic claim that gave individuals a highly revered status. To perpetuate this status, the emperors built temples and shrines in honor of the dragon gods. To further the exaltation of this status symbol, they commissioned pagodas built throughout the country and established the practice of burning incense and offering prayers to the dragon gods.

Nine Sons of the Dragon King

The significance of the number nine continues throughout Chinese mythology and culture. In ancient Chinese dragon mythology, it's said that the dragon king had nine sons after copulating with different animals, creating hybrids. Each son was sent into the world with specific duties as the heir protectors of Earth and its people. While there seems to be an inconsistency in the actual names of the nine sons, their physical attributes and missions are always the same.

The oldest known depiction of a dragon was discovered in 1984. It's called the Coiled Dragon and was carved out of jade. The figure was found on the burial chest in an ancient cemetery dating to the Hongshan era (4700 - 2920 BC). Other jade carvings of dragons have been found in abundance during the Liangzhu era (3300 - 2200 BC).

The Chinese dragon has a distinct appearance. The dragon physical attributes were often a combination of various body parts, such as horns and types of claws. Some were combinations of a lion and dragon, said to be the result of the dragon king copulating with different animals. Traditionally, the Chinese royal dragons have five toes or claws. The Chinese four-toed dragons are considered common and not part of the nobility. Korean dragons have four and the Japanese dragons have three.

Other physical attributes include: 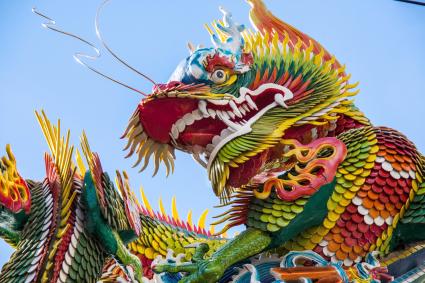 Wrath of the Jade Emperor

When the Jade Emperor discovered what they'd done, he had four mountains placed over the dragons so they would be trapped for all eternity. The four dragons turned themselves into rivers to flow around the mountains. The rivers became known as the Long River (Yangtze), Black Dragon (Herilongjian), the Pearl River (Zhujiang), and Yellow River (Huanghe).

Feng shui capitalizes on the powerful energy of the dragon with practical applications of this symbol. You can use the dragon in your home for attracting great abundance and prosperity.

Ancient China dragons are such an intricate part of the Chinese culture that they're found in almost every kind of art form and architecture as symbols of protection and prosperity. You can use the dragon's power in feng shui applications to infuse into sectors, such as career or wealth.